The word ersatz (erzac in Polish, from the German ersetzen – to replace) came into prominence during World War I, initially in Germany, but gradually in most of the countries involved in the conflict. An ersatz is a substitute for a thing or activity – an imitation of something that is indispensable or highly desirable, usually of inferior quality, but sharing characteristics with the original, such as a sweet taste or similar effect. It is one of the symbols of times of war and crisis, when literally everything can be ersatz: food products, clothes, petrol, building materials. The work of women who replaced enlisted men in armament factories, mines and in public transport was also considered ersatz. The German army even had an Ersatz-Division – replacement battalions formed from less trained conscripts who were moved to the front when other soldiers, better prepared for battle, were ordered to rest. Those fighting in the Ersatz-Division were far more likely to suffer stress and die in the trenches than those they were replacing, as their commanders were well aware. Ersatzwas hugely important for maintaining social order and it was cleverly used. It was possible to launch a drink imitating coffee or Pepsi, but also to establish bogus free media. Years of experience, especially of totalitarian and authoritarian regimes, have shown that ersatzes can be used to effectively pull the wool over the eyes of individuals, but also on a large scale that affects entire social groups or nations.

Ersatz. But what if it is not Germanic and military – effective and limited in time, needed due to temporary shortages – but a more familiar version, such as the domesticated erzac,  an everyday companion forcing us to be creative while turning a blind eye? Forever aspiring, aware of some better worlds, at least in terms of quality, which it calls into being by the very fact of its existence. After all, what would the original be without its inferior ersatz, without this more or less faithful substitute? An ersatz forever sustains on its frail labels the order of a world laced with aspiration and scarcity. Imitation is said to be the highest form of flattery, and its faithfulness or crudeness seems to determine relations of dependence and hierarchies, both interpersonal and geopolitical.

Post-transformation Poland, and perhaps, by default, the entire region, was built by means of a shock therapy resulting in a deluge of counterfeits and the belief that without moving too much, one could find oneself on the western rather than the eastern side. According to some interpretations, the political transformations in Eastern Europe rested on a rather clumsy attempt to imitate the West. The question of whether imitation has become nature or rather an obvious sham is connected with the moment when the value of the original is reassessed in the face of war and the crisis of democracy. Can it be that the local ersatz will be viewed as a good in itself? Can an imitation break free?

An ersatz has always been, and continues to be, one of the most tangible manifestations of class divisions. The transition from an illicit copy to the real thing is one of the ultimate symbols of economic advancement. Financially privileged groups have no need to opt for substitutes, not only in the context of material goods. On the other hand, it is precisely these groups that use their enormous financial resources to create the greatest imitations of our time – ersatz cities built in a few months, artificial islands or staged sporting events intended to generate authentic emotions despite paid fans, bribed referees or the removal of members of the LGBTQ+ community from the stands. Often with the support of the official policies of governments or monarchs, these groups make their fortunes through the mass production of ersatzes. Today’s Ersatz-Division is formed from workers drudging under inhumane conditions, without adequate training, underpaid or not paid at all, risking life and limb on a daily basis in factories or on construction sites.

Discussions about an ersatz must necessarily invoke some original, a more or less “real” point of reference, the one and only. According to some, atheism, childlessness, the search for spirituality or functioning in virtual reality can only be ersatzes of what they see as the only acceptable, “authentic” life. Understood in this way, an ersatz leads us astray, deceives with its glitter, prevents from learning what is truly best for us. The right to proclaim which model of life is wholesome and which is ersatz is where political and social power meet, where individual choices are confronted with the community’s default model of functioning. From this perspective, the question of personal authenticity is stretched between two only seemingly distant poles – being rooted in patterns sanctioned by some implicit tradition, and distancing oneself from one’s self-image presented to the world.

In Western civilisation, the history of the sound arts has always been based on perfecting imitation – the score was supposed to allow the reproduction of an ideal performance. Although it has never existed in reality, events such as the Chopin or Moniuszko competitions continue to be based on this premise. The majority of innovative musical instruments were primarily intended to sound like the violin; the radio and surround sound techniques were intended to give the impression of being in a concert hall. In cinematography, sound art is a constant tug-of-war between imitation (Foley art) and creation of reality (sound design). Muzak reverberating across shops and offices, artificial fountains and sounds of nature are intended to soothe the human mind with the fake soundscape. Exercising our extraordinary ability to adapt hearing to reality (or its imitation) has become a tool for sound studies. Is this already an effective defence against the disorientation of immersive arts?

Is it therefore possible for us to do without ersatzes in a reality in which red herrings have become an approved political strategy, where the deluge and speed of information (or its surrogates) define the seriousness of the problems to be discussed or, less often, solved? Isn’t the conversation about ersatzes actually a discussion about reality defined by a lack of agency? This so-called reality, in which even social and political empowerment can turn out to be ersatz, manifests itself as a festival of apparent needs, aspirations and satisfactions – a strange procession of disappointments, ceaselessly calling for more effort, more energy and resources to search for new, but always external, sources of satisfaction and validation.

We invite you to submit proposals of art projects for the 21th edition of SURVIVAL Art Review, which will take place from 23 to 27 June 2022 in the former depot Popowice. “ERSATZ” is the slogan to which the proposed applications should refer.

When submitting a proposal, we ask you to take into account the character of the available spaces; we also consider displaying art projects outside of the building.

The deadline for submitting proposals expires on 28 February 2022. Proposals can be sent by completing the form and the attachments. The SURVIVAL curators will then choose artworks to be presented in the chosen venue. 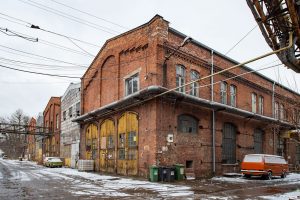 The Legnicka depot is the last historic building of such size preserved in the Przedmieście Mikołajskie suburb. It was built in 1900-1901 as the largest of Wrocław’s three depots serving its modern electric tramway system. It had an area of almost 7,000 m2 and comprised two parking halls that could accommodate 56 tram cars. In addition, the complex included administrative offices, workshop halls, warehouses, stables, a salt store, a bathhouse for employees and a water tower. It functioned as the main repair shop for Wrocław’s transport company. During the First and Second World Wars, women began to be employed here to replace men called up to the front, as was the case in other companies, too. Before that, it had been thought that they should not work in industrial and transport enterprises. This was supposedly due to their poorer health and fragility, but the actual reason was a fear of breaking an “eternal law of nature.” In the patriarchal reality, women were only “fit” for domestic and care work. After 1918, women were dismissed from positions in public transport (they could only work as ticket inspectors).

The depot emerged from the siege of Breslau in 1945 in relatively good condition, given the enormity of the destruction in its vicinity. All the buildings on its premises survived. The workshops were looted and some of the trams fell into the inspection pits, but the depot could resume functioning relatively quickly and as early as 1946 it began to serve Wrocław’s tram fleet as the main repair facility in the city, known as depot no. 6 – Popowice. Like the other depots in the city, it played an important role during the Solidarity strikes – the municipal transport company was among the first enterprises to go on strike in Wroclaw, sending a signal to other factories to show solidarity with the striking shipyard workers in Gdańsk.

The depot on Legnicka Street is one of Europe’s most historically valuable public transport facilities. It still houses many original elements and old trams. Together with other city depots (all of which are historic buildings), it is part of the oldest and best-developed historic public transport system in present-day Poland.

The depot is located in the western part of Wrocław, in the Przedmieście Mikołajskie suburb. Until 1945, it was a densely developed area with the largest concentration of multi-family tenement buildings in Wrocław. In the 1920s, a huge modernist housing estate designed by the well-known architect Theo Effenberg was built in close proximity. In the wake of the siege of Festung Breslau, the district was almost completely destroyed – more than 90% of its buildings ceased to exist. No trace remained of the famous Effenberger estate, which had existed for less than 20 years. The war literally turned this part of the city into a sea of ruins. Przedmieście Mikołajskie became one of the areas symbolising the senselessness of war and its tragic consequences. Photographs of burnt-out shells and streets covered with rubble have often been reproduced in history books and documentaries. Today, apart from the depot, only a handful (out of several hundred) tenement houses and other buildings have survived in Mikołajskie Przedmieście, hidden among the blocks of flats that began to be erected here on a large scale in the 1960s.

RULES OF THE OPEN CALL